We are site architects

bayernhafen comprises six locations: Aschaffenburg, Bamberg, Nuremberg, Roth, Regensburg and Passau. What makes its locations so outstanding is the combination of direct proximity to economically important geographical hubs and efficient linking of the transport routes of inland waterway, rail and road. Every year, about 9 million tonnes of goods are moved by inland waterway and rail.

bayernhafen acts as a ‘site architect’ that develops strategies spanning different companies and locations, invests in infrastructure, and cooperates closely with the companies settled in its ports to tap new potential for value creation. Its objective is to further strengthen the position of the ports as logistics hubs and as major platforms for the global exchange of goods. Strategic land management ensures a mix of industries from the transport, warehousing, logistics, service provision and production sectors.

800 hectares (8 km2) of total port area and more than 400 companies operating from its ports providing over 13,000 jobs also make bayernhafen one of the best-performing logistics networks in Europe and one of the major drivers of the Bavarian economy. bayernhafen itself has 200 employees.

Sustainable means creating something that lasts, something built for the future which uses resources sparingly. Do the bayernhafen inland ports deliver on this? Or perhaps more pertinently: What contribution is the group making to what is known nowadays as “green logistics”?

Goods ensure our quality of life – goods such as food, energy, building materials and fuels, computers, washing machines and pianos. Other goods, such as German-made machines, are exported. One decisive factor is that all of these goods are transported in a way that is as environmentally compatible as possible. The bayernhafen locations deliver on this requirement by smartly integrating the three freight forms of road, rail and inland waterway. Combined transport (CT) involves at least two modes of transport combined into a transport chain, e.g. road/rail or road/inland waterway. The result: a two-thirds reduction in energy consumption and transport-related CO2 emissions per freight unit compared to exclusively road-based freight. The inland ports of bayernhafen are therefore the ideal locations for production companies with intensive logistics and transport requirements.

Land is a valuable, scarce resource in densely populated Germany. bayernhafen treats this resource with particular care. The group enables new uses of available land (conversion), creates new commercial sites with a forward-looking approach and sense of proportion, and offers its tenants “temporary ownership” through lease-holding. In this way, bayernhafen has succeeded in creating room for new, modern, demand-driven developments at its corporate locations over the course of decades.

Inland ports and renewable energies complement each other perfectly. Logistics buildings with their large roof areas are ideally suited for photovoltaic systems.

A 16,000 m2 roof can supply enough solar power for around 250 households, saving around 750 tonnes of environmentally-harmful CO2 every year.

Another example is wind energy. What could possibly transport wind rotor blades measuring over 50 metres in length more safely than a barge? This is the reason why wind turbines made in Germany are transported down the Danube from bayernhafen Passau to destinations such as Bulgaria, helping to produce environmentally-friendly electricity.

Timber also plays a key role, such as at bayernhafen Aschaffenburg. It is used both as a raw material for furniture and paper production as well as for bio-energy in the form of pellets and briquettes. The latter are produced in a biomass-CHP plant located on port premises and are shipped via the container terminal. The proximity to production sites and the environmentally advantageous transport offered by inland waterway and rail offer huge benefits – both for companies and for our environment as a whole.

The six bayernhafen locations providing around 13,000 jobs are key drivers of the economies in their respective regions. Around 9 million tonnes of goods are moved at these locations by inland waterway and rail every year. The primary objective is to prevent or reduce harmful emissions to the greatest possible extent. Where emissions cannot be avoided, a safe distance is always maintained to neighbouring companies and communities. bayernhafen remains in close dialogue with the local authorities, helping to strike a balance between the interests of business and local residents. 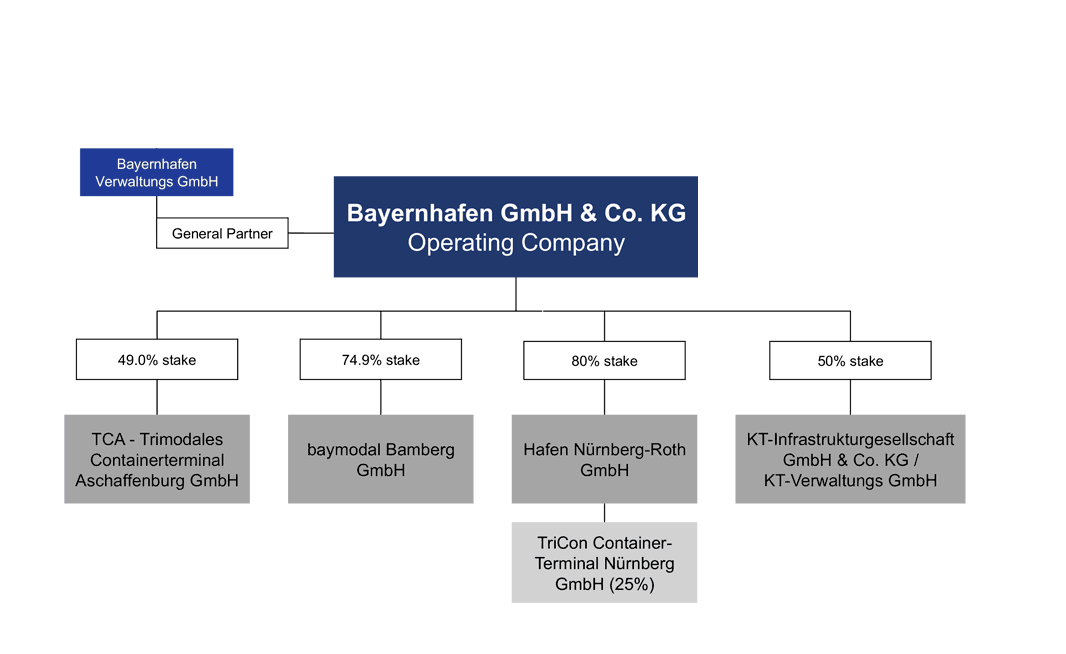 The Kingdom of Bavaria recognised the importance of an efficient traffic infrastructure at an early stage. For this reason, ports were established at the where its key modes of transport intersected. Due to the importance of their locations, even before World War I, ports were established in Ludwigshafen, Regensburg, Passau und Aschaffenburg.
When the regional railways merged with the German Reich Railways in 1920, the Free State of Bavaria contractually retained the state ports that it had enlarged to supply the Bavarian State Railways. As these ports had previously been run by the rail administration as secondary operations, the need arose for re-organisation.

1925 - The Ports of Bavaria Authority is established

The port authorities in Ludwigshafen, Aschaffenburg, Regensburg and Passau were established by way of Act dated 27th August 1925. Together, they formed the Ports of Bavaria Authority governed by the State Construction Authority, which in turn reported to the State Ministry of the Interior.
In 1931, the Port Authority of Passau was dissolved and the now-defunct authority was assigned to the Port Authority of Regensburg. After World War II, Bavaria lost the ports of Ludwigshafen, Speyer and Maximiliansau along with some territories west of the Rhine. In their home territories, the port authorities in Regensburg and Aschaffenburg, along with their respective ports, remained in Bavarian hands.

1953 - From port authority to enterprise

On 1st April 1953, a paradigm shift occurred. The state port authorities, which, until that time, had been operated separately, were combined into one commercially run enterprise and the foundation was laid for their entrepreneurial direction.
A further Bavarian port authority was established in Bamberg in 1958 to replace the old city port of Prinz-Ludwig-Hafen established in 1912. For this purpose,on 13th May 1958, the Port Authority of Bamberg was established. The port was inaugurated on 25th September 1962 at the same time as the expansion work on the River Main was completed.

On 11th November 1966, the so-called port agreement was signed in Nuremburg. It was designed to regulate administrative and financial relations between the city of Nuremberg and the Free State of Bavaria in the building and running of the state port. To this end, the Nuremberg Port Authority was established on 1st September 1967. The newest Bavarian state port was officially declared open by the then governor Alfons Goppel on 11th August 1972. At the same time, the Main-Danube canal to Nuremberg was completed.

On 1st January 1995, the responsibility for operating the port of Nuremberg was transferred to the newly established Hafen Nürnberg-Roth GmbH, in which Bayernhafen GmbH & Co. KG holds an 80% stake, while the remaining stakes are held by the City of Nuremberg (19%) and the City of Roth (1%).

The link between the North Sea and the Black Sea was completed.

A new era began for the former Ports of Bavaria Authority on 1st June 2005. As a result of a cabinet decision taken in 2004, the Ports of Bavaria Authority became the privately run Bayernhafen GmbH & Co. KG. Through this change in legal structure, new opportunities arose with regard to financing, investment and exploitation of new areas of business.

For its part, the corporate group has a share in the operating companies of the newly established Combined Transport terminals in Nuremberg (2006), Bamberg (2008) and Aschaffenburg (2012).