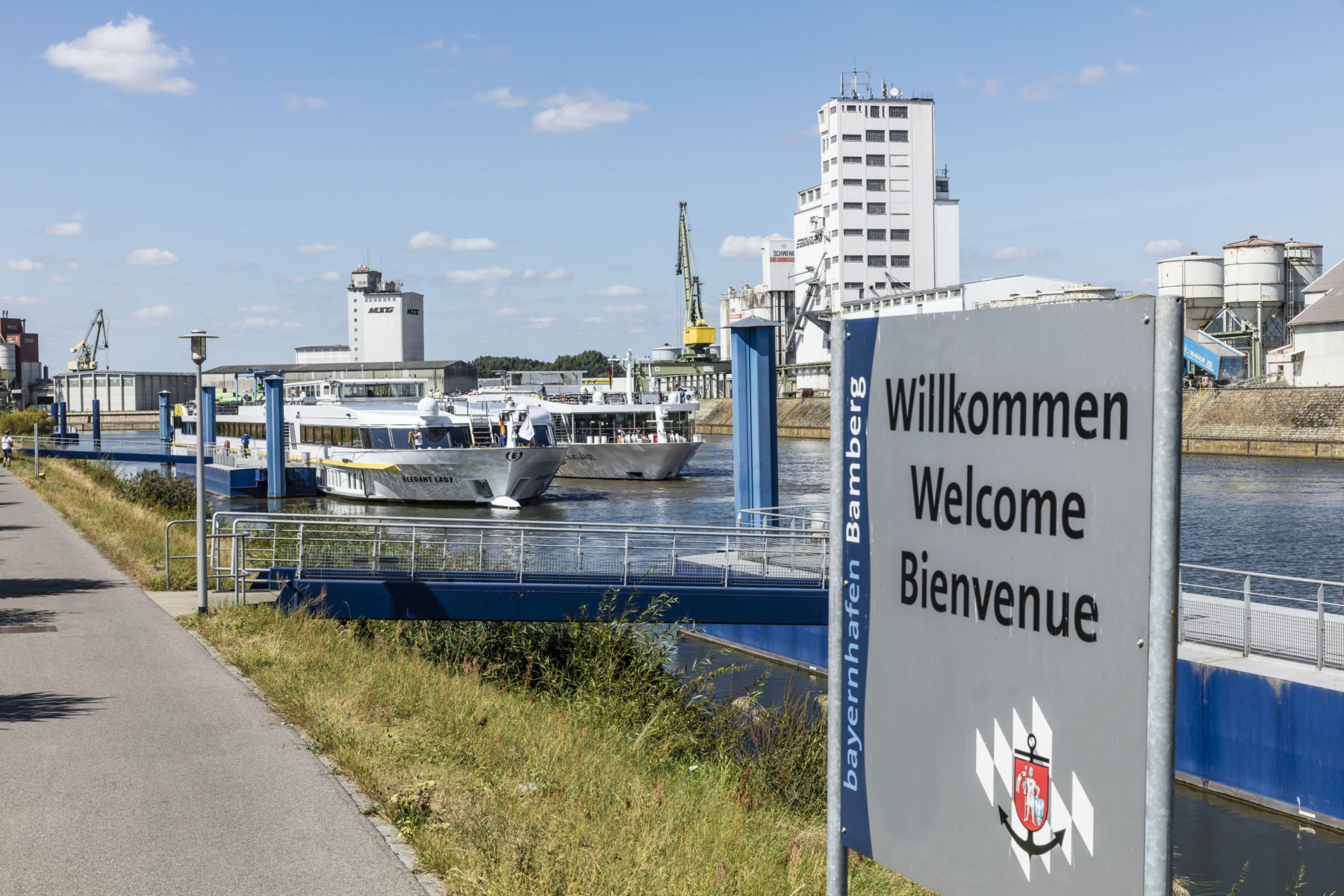 Upper Franconia's gateway to the world

bayernhafen Bamberg is the most important hub for freight transport for the entire Upper Franconia region. It makes a considerable contribution to serving citizens and businesses and provides producers in the region with access to international transport networks. The port efficiently links road, rail and inland waterway. bayernhafen Bamberg is home to companies from the logistics, cargo transfer, shipping, production, recycling and service sectors.

Grain becomes corn, corn becomes flour, flour becomes bread. bayernhafen Bamberg plays a key role in the chain from field to breakfast table. Cereals, foodstuffs and animal feed are particularly suited to transport by inland waterway and represent the lion’s share of the ship cargo handled at bayernhafen Bamberg. Companies also use the container terminal at bayernhafen Bamberg to export their products and to import intermediate goods and components.

Our high-performance infrastructure enables us to provide non-discriminatory and cost-effective access to the three equal modes of transport rail, road and inland waterway.

In order to provide the companies operating from our port with the best possible connections and accessibility, we permanently invest in the development of our infrastructure.

Should you experience any disruption or impediments when using our infrastructure, we can be reached around the clock via our location-wide hotline. 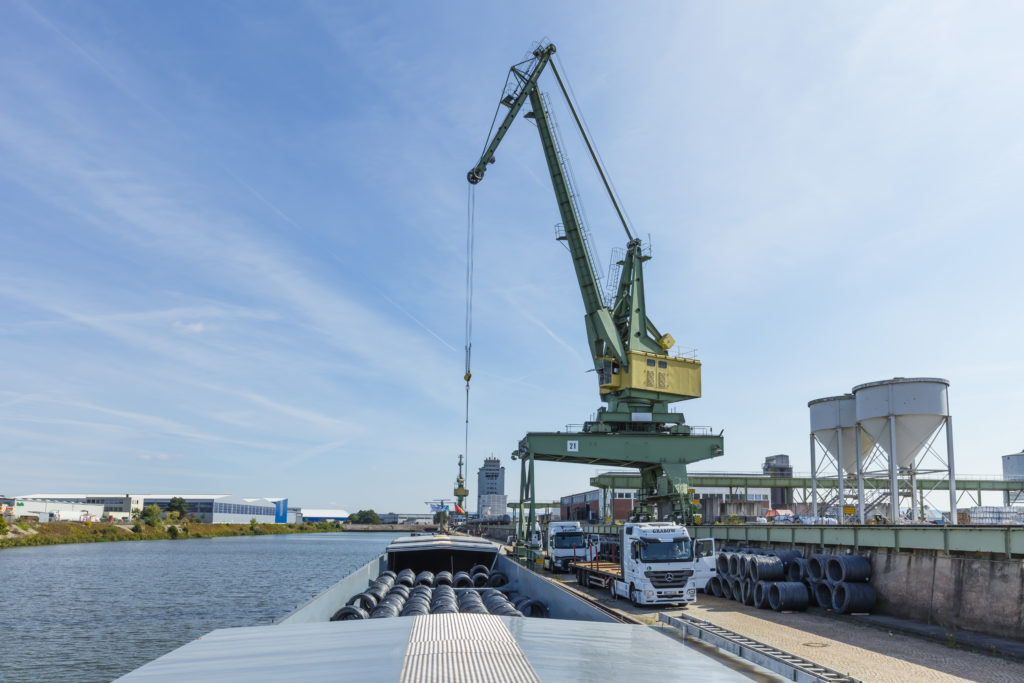 Cargo-handling berths: up to 18

The network enables you to reach practically all companies operating from the port by rail. There is also a direct connection to the CT terminal.

For more information on the port railway system or on the infrastructure use agreement, please contact the Rail Operations Manage. 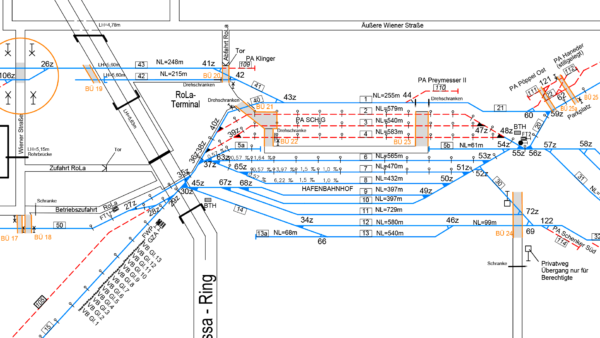 Fully developed commercial sites, excellent infrastructure and trimodal connection of the three transport modes of road, rail and inland waterway offer the best conditions for establishing your business in bayernhafen Bamberg. Our location is particularly ideal for companies operating in the logistics sector or manufacturers who rely heavily on freight transport.

We would be more than happy to present our services to you in person. 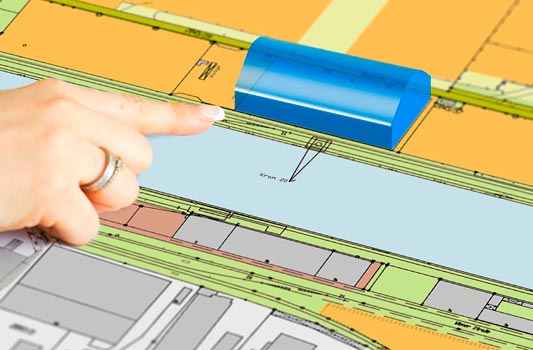 Are you looking for land for your business that

Would you like to be in good company and

Then feel free to contact us today. We would be more than happy to present our services to you in person!

We currently do not have any office space on offer

Please send us an enquiry if you are interested in storage/warehouse space.

A wide range of goods are moved by road, rail and inland waterway at bayernhafen Bamberg. This includes traditional goods such as agricultural and forestry products, fertilisers, minerals and earths, as well as mineral oil, groupage freight and containers.

Would you like to find out more about our services or register your shipment for handling?

We would be happy to provide you with an individual offer.
We look forward to hearing from you! 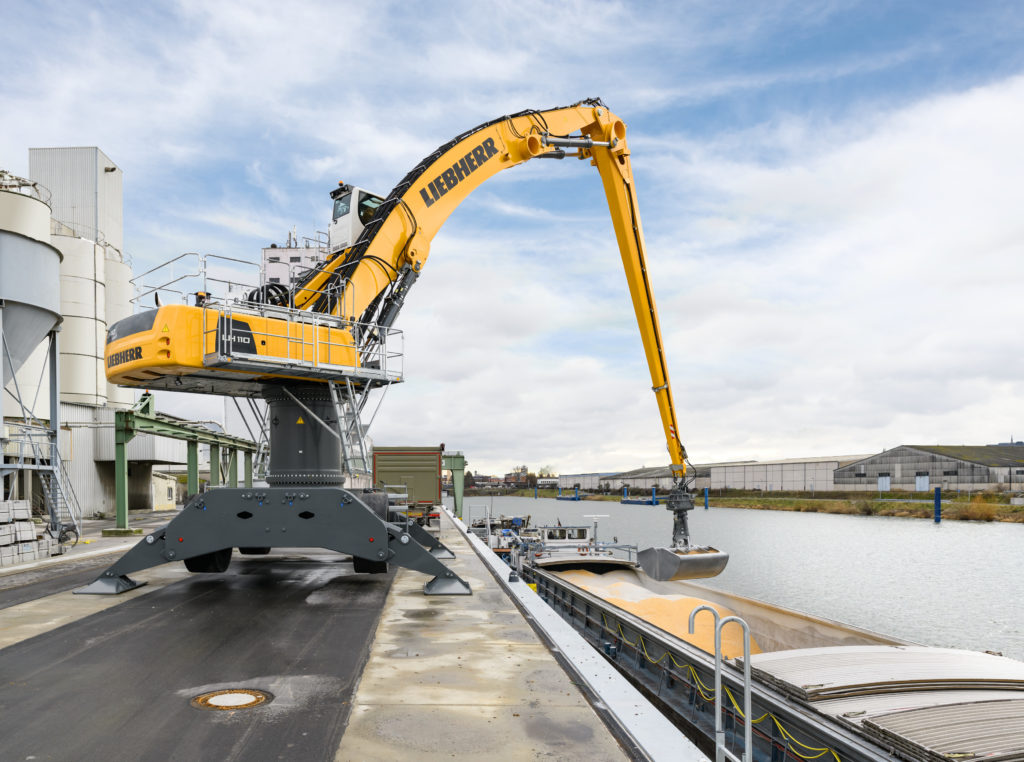 High-performance cargo-handling machines ensure seamless cargo transfer. Bulk cargo and ultra-heavy-lift groupage freight are transferred via the port’s dedicated cranes or through the use of truck-mounted cranes. The roll-on/roll-off facility enables all types of road freight to be loaded and unloaded directly from ship to shore or vice versa without requiring cargo handling equipment. In addition, a railcar loading ramp is available for transferring freight onto rail.

High-performance rail-mounted and mobile cranes ensure seamless cargo handling. We handle complex and heavy loads through the use of special equipment, such as flow chutes and pumping facilities.

General Terms and Conditions for the Provision of Cranes (in German)

Ultra-heavy-lift, overlength and bulky cargo can be handled via our heavy-lift transfer site. Heavy loads up to 125 tonnes can be handled using truck-mounted cranes on quay 3.

Suitably equipped storage capacity is available at our port for the storage of bulk goods, groupage freight, liquids and heavy-lift cargo as well as combined transport unit loads. With numerous silos, refrigerated warehouses, oil tanks, container depots and technical equipment, we and the companies operating from our port are specialised in all manner of transportation storage.

Order picking and packaging, processing, recycling and finishing round off the range of comprehensive services and activities we offer.

The key terminal for the regional economy

Through streamlined processes in our high-performance bimodal combined transport terminal, we deliver cost-effective transfer of your goods onto trains bound for German seaports. Thanks to the connection to our hub in Nuremberg, international destinations can also be scheduled. baymodal Bamberg GmbH guarantees smooth terminal operations and cargo handling between rail and road. 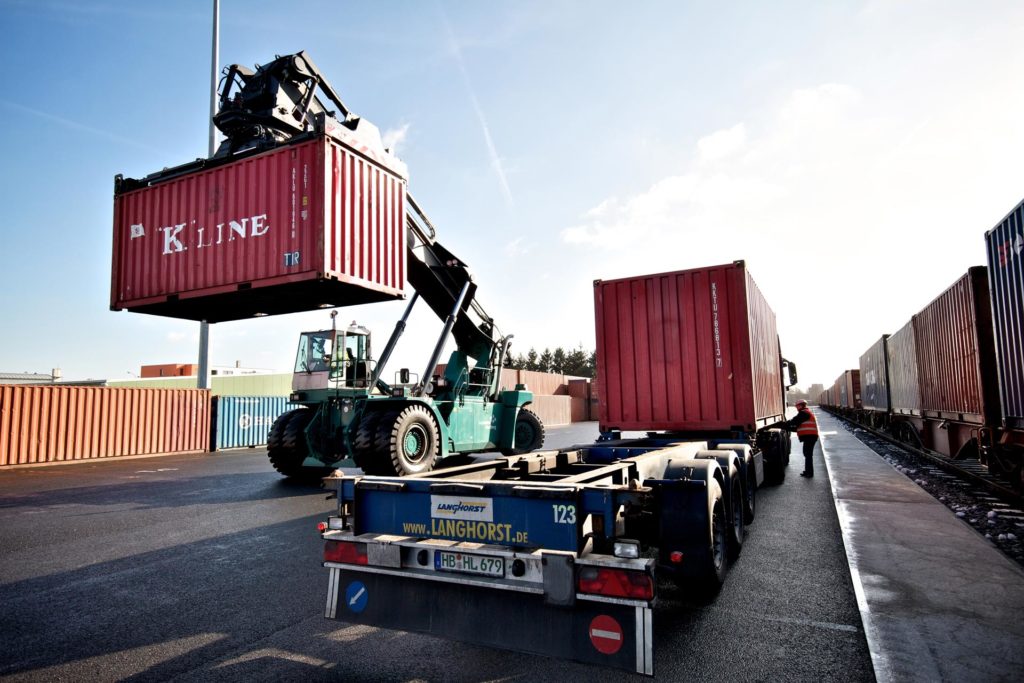 The following RTCs offer rail services at our Bamberg location:

Travel by river cruise ship has grown in popularity and is now an important pillar of bayernhafen’s product portfolio. With docking facilities for passenger ships in Aschaffenburg, Bamberg, Roth, Regensburg and Passau, bayernhafen offers the river cruise sector five locations in Bavaria from a single source.

bayernhafen’s locations are the starting point for tens of thousands of tourists from all over the world every year. While they enjoy their time on shore and explore the region, the ships can, for example, replenish their fresh water tanks or dispose of their waste. River cruises also benefit the cities they visit, as research studies on the regional value creation of tourism confirm. While they are on shore, the passengers spend money on items such as souvenirs, restaurants and clothes, along with expenditure on excursion packages and bus transfers. In addition, the advertising effect for the cities the cruise ships visit is enormous.

Since 2007, bayernhafen has operated a state-of-the-art landing pier at the Bamberg location that enables up to 9 cruise ships to dock simultaneously. bayernhafen performs all services itself.
The solutions developed in cooperation with the City of Bamberg and the cruise ship operators following the ‘Cruise Ship Open Days’ in 2016 have proved to be successful in better reconciling the interests of the tourists and the inhabitants of the city. These solutions include smaller groups and different routes. 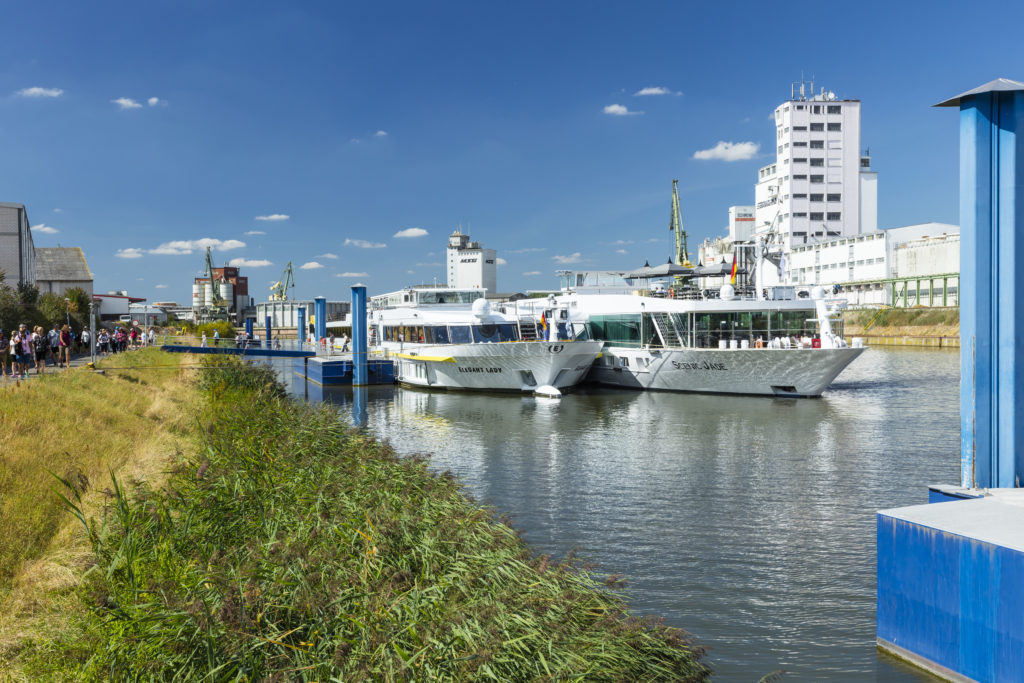 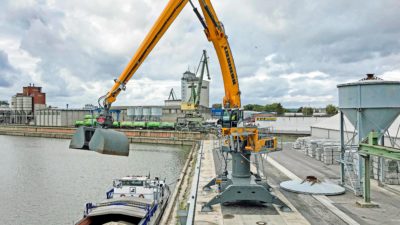 Bamberg, 12 March 2020 – In 2019, bayernhafen Bamberg (along with Aschaffenburg Nuremberg, Regensburg, Roth and Passau, one of the […] 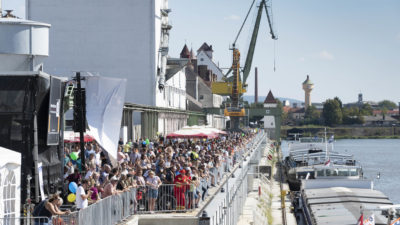 Bamberg residents soak up the sun in the port

Bamberg, 17 September 2019 – What a day to remember at bayernhafen Bamberg! The late summer weather on the first […] 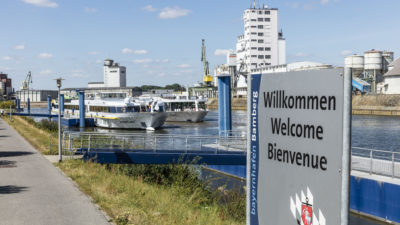 The UNESCO World Heritage City of Bamberg was awarded the Cruise Critic® “Cruisers’ Choice Destination Award 2019”. Bamberg, along with […] 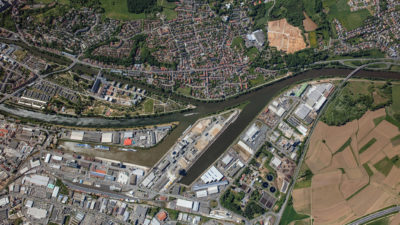 “We are making our infrastructure even stronger”

How did bayernhafen Bamberg develop last year? Which goods did it handle most?

Find answers to these questions and the most important facts and figures here. 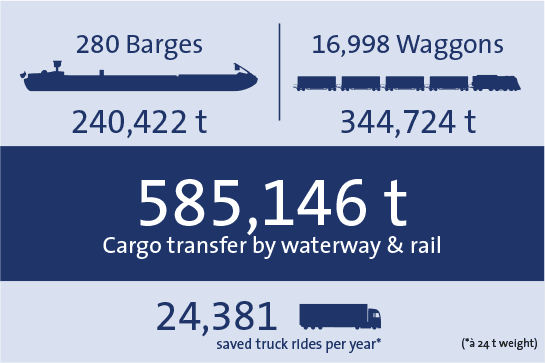 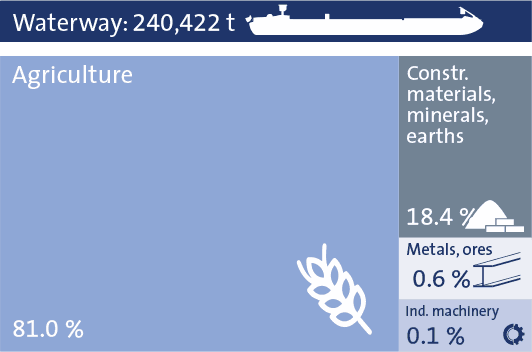 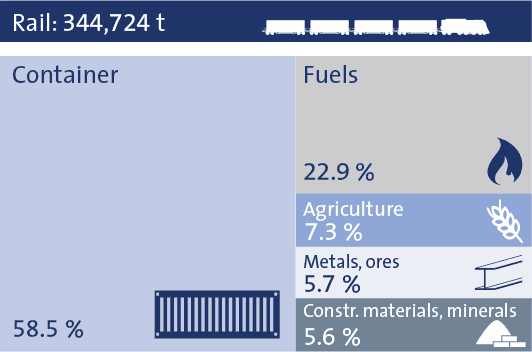 The ports are subject to special rules and regulations. Here, you can download the Port Rules and Regulations for bayernhafen Bamberg:

In addition to cargo and freight, the passenger cruise sector is also a key focus at bayernhafen Bamberg.

Before you arrive at bayernhafen Bamberg, please contact our ship registration office by radio on channel 11 or by telephone at + 49 (0) 951 / 965 0522 to register your ship. We will then guide you to the correct docking berth.

Drinking water can be obtained on quay 3/corner quay 4 following registration with the Port Master.

Electricity can be obtained at each quay 2, 3 and 4 following registration with the Port Master.

It is not permitted to hose down and clean ships at bayernhafen Bamberg.

The network is directly connected to the rail traffic hubs of Bamberg, offering direct access to the European rail network and presenting ample opportunities for handling your goods by rail.

As a result of liberalisation of the rail transport system, we are able to provide non-discriminatory access to our infrastructure not only to Deutsche Bahn, but also to private rail transport companies (RTCs). This has led to steady growth in rail transport at bayernhafen Bamberg over recent years.

In order to continue to do justice to the growing importance of rail traffic in the future, we have set ourselves the goal of further optimising rail operations and investing in infrastructure for the benefit of our customers and the companies operating from our port. For example, at the end of 2008, we opened a new bimodal handling facility for combined transport. We continually carry out repairs on the track, change sleepers, and so on.

bayernhafen Bamberg has its own freight transport station number (220913).

Are you interested in logistics, are a college class (such as a vocational college for freight forwarding, or a geography class at a secondary school) or are you doing a degree in logistics or transport science? Then contact us today. Depending on the availability of staff, we will do our best to arrange a guided tour for you.

Please note that we cannot provide a bus for the tour. You would have to provide your own bus.

Unfortunately, we do not offer guided tours around the port by boat. We can, however, give you a tip: Take a trip on one of the ships of the Bamberg passenger ship company, Kropf, and let yourself drift downriver on the left-hand side of the Regnitz, along the world-renowned tourist attractions such as the old town hall, the cathedral and ‘Little Venice’ to the destination of your choice.

Find out more on the website of Bamberger Personenschifffahrt Kropf under “port excursions”.

First documented mention of the town of Hallstadt as a strategically important border crossing on an ancient arterial road between the Rhine and the Danube.

The “Lorscher Annals” report that Emperor Charlemagne had 6,000 workers work on a moat “2,000 steps long and 300 feet wide” to connect the Main to the Danube.

Bamberg merchants are mentioned in documents as users of the Regnitz-Main waterway.

The Bamberger Rechtsbuch mentions for the first time the loading of a ship in Bamberg.

It is reported that the Bamberg skipper Gundelach delivers iron from Bamberg to Aachen by water.

“An den Kranen” is reported as having a stone quay and a wooden loading crane.

A storehouse ordinance is issued by the prince-bishop and a weighing scale is built.

Completion of the feasibility study for a connecting canal between the Main and the Danube.

The proposed route designed by Heinrich Freiherr von Pechmann is accepted and enshrined in law.

A ship connection is established between Bamberg and Cologne.

Foundation of the Main-Dampfschifffahrtsgesellschaft (Main Steamship Company), which establishes a connection from Bamberg to Mainz.

After 10 years of construction the Bavarian. King Ludwig I opens the Ludwig-Danube-Main Canal, which begins in Bamberg and ends in Kelheim.

The new Prinz-Ludwig-Hafen is built to the north of the city.

The port is extensively developed and modernised.

Opening of the Main-Danube Canal with development of new markets in the Danube region. Full speed ahead from the North Sea to the Black Sea!

Development of the port of Bamberg into a modern multimodal freight transport centre of nationwide importance.

Check-in of the first passenger ships at quay 5 in bayernhafen Bamberg.

Opening of the urgently needed new passenger landing pier (with 2 jetties) at quay 5.