2020 financial year: 8.75 million tonnes of cargo and freight moved by inland waterway and rail; despite Corona, 94% of the volume handled in 2019. A powerful testimony to the key role played by the bayernhafen locations in the provision of goods. 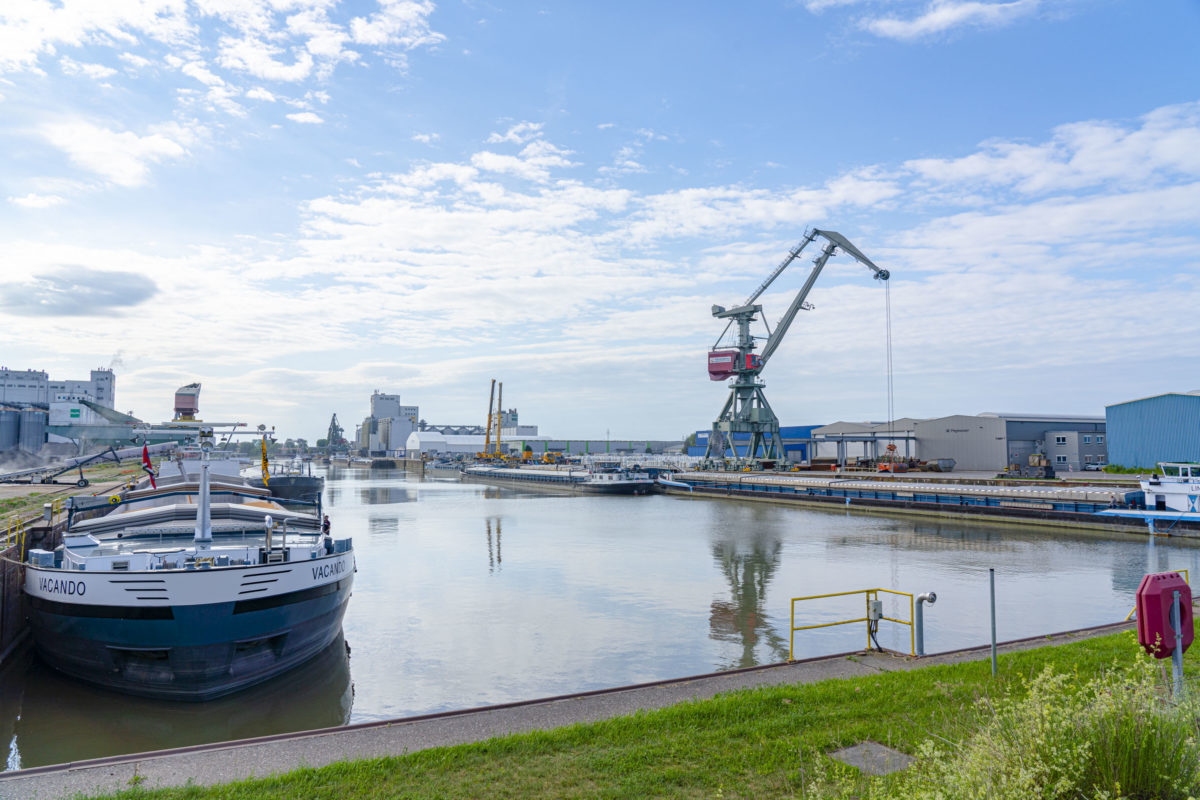 Regensburg, 4 March 2021 – bayernhafen brings together a highly diverse range of goods and delivers the right infrastructure to meet the challenge of shifting long-distance traffic from the road networks to the two environmentally friendly transport modes of inland waterway and rail. Even – and indeed, particularly so – in times of crisis, we must be able to rely on the steady supply of the goods that meet our daily needs, and the same is true of the delivery of the products of Bavarian companies to their customers. In 2020, bayernhafen handled a total of 8.75 million tonnes of cargo and freight by inland waterway and rail at its six locations of Aschaffenburg, Bamberg, Nuremberg, Roth, Regensburg and Passau – that is 94% of the cargo and freight handled in the previous year. This corresponds to around 1,400 daily truck trips with an average load of 17.2 tonnes.

Functioning supply chains are essential for our society.

3.158 million tonnes of goods were transported by inland waterway in 2020, up 6.5% on the 2019 financial year. In contrast, rail freight handling fell by 11.6% compared with 2019 to 5.593 million tonnes. Thus, in times of crisis – and indeed, in particular so – bayernhafen proves that it is a guarantor of the modal shift: Every day, bayernhafen’s customers ensure the reliability of the supply chains that deliver food and other everyday necessities. Industry and commerce use rail and inland waterway as alternatives to road for long-distance transport because bayernhafen’s skill at developing modal interfaces efficiently links the different modes of transportation. Through these services, bayernhafen sustainably contributes to enabling the various modes of transport to play to their strengths, taking pressure off the road networks and reducing CO2 emissions.

At the bayernhafen locations, goods such as agricultural produce, construction materials, foodstuffs and fuels as well as industrial goods, such as machinery, automotive parts and heavy-lift, are transported by inland waterway and rail.

“We bring together goods of all kinds at each of our locations,” says Joachim Zimmermann, the Chief Executive Officer of bayernhafen. “This is the basis on which we link the two environmentally friendly transport modes of inland waterway and rail for long-distance traffic and road for shorter routes. Our ports operated reliably in 2020, and reliability was of particular importance in a year such as last year, because functioning supply chains are of the essence in our society. 2020 was the year in which many people truly understood what that means.”

Even in such difficult times as 2020, we teamed up with our partners to carry out pioneering projects.

CT network expanded during the crisis

In 2020, at 403,931 TEU (twenty-foot equivalent unit), the Combined Transport throughput was 89% of the volume handled in the previous year. In addition to containers for seaport-hinterland traffic, this includes swap bodies and semi-trailers for continental and transalpine cargo and freight transport.
Furthermore, a number of cross-border freight train services were added during the crisis in 2020: In October, train services linking Aschaffenburg to Novara in North Italy went into operation. In November, a direct train service started running from Nuremberg to the seaport of Trieste. “Even in such difficult times as these, we have teamed up with our partners to carry out pioneering projects,” says Joachim Zimmermann. On 1 February 2021, the AlbatrosExpress started running services linking bayernhafen Passau to Hamburg, Bremerhaven, Bremen and Wilhelmshaven. These services mean that all of the five trimodal bayernhafen locations of Aschaffenburg, Bamberg, Nuremberg, Regensburg and Passau now run scheduled rail services to the German seaports.

In 2020, bayernhafen once again maintained a high level of investment it had made over the previous years at all of its locations, investing around € 17 million in the redevelopment of its commercial sites and port infrastructure.

The companies based at our locations also undertook investment in 2020. At bayernhafen Regensburg in March, Horst Pöppel Spedition commenced operations at its new multi-user warehouse equipped with dedicated sidings to handle food/non-food products, such as wine coming from Italy by rail. These goods are then shipped from Regensburg to distribution centres serving the retail food industry.
In May, the energy supplier, MaierKorduletsch, commenced operations at its wood-pellet silo storage facilities at bayernhafen Passau. The three 30-metre high silo towers can store a total of 4,500 tonnes of this source of renewable energy.
In July, bayernahfen Nürnberg opened a liquid natural gas refuelling service station. The initiators and operators of the new LNG service station are the Neumarkt-based energy supplier, Rödl energie, and BayWa Mobility Solutions GmbH from Munich.

“In our capacity as ‘site architects’ we create the conditions for providing high-intensity logistics companies with commercial sites in close proximity to rail and inland waterway facilities,” says Joachim Zimmermann. “We mange our land strategically, placing a consistent focus on recycling existing sites, rather than consuming new land.” One of our key focuses is the protection of biodiversity: Although our core business involves developing and managing industrial sites, commercial areas and transport facilities, they can be combined quite nicely with natural areas. Examples of this are the planned “eco-account” biodiversity offsetting areas in Regensburg and the habitat corridor concept in Aschaffenburg.”