A strong port for a strong metropolitan region 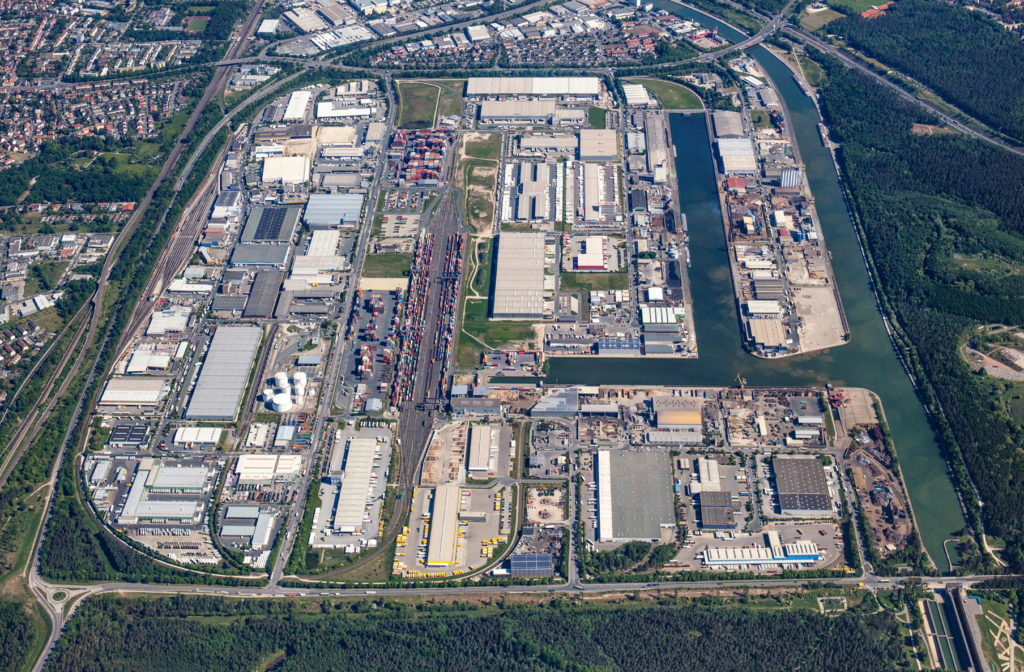 Nuremberg, 19 March 2019 – In 2018, bayernhafen Nürnberg and bayernhafen Roth, along with Aschaffenburg, Bamberg, Regensburg and Passau, two of the six bayernhafen corporate locations, continued the steady development of its port infrastructure. bayernhafen Nürnberg initiated investment of € 4.5 million in 2018 to boost the efficiency of its infrastructure and provide industrial, trade and logistics companies with the best arguments for using the environmentally transport modes of inland waterway and rail for their import and export activities. Despite the longest ever low-water level period in history, a total of 4.28 million tonnes of cargo were moved by barge and rail at bayernhafen Nürnberg and Roth, 6.15% up on 2017. Container traffic recorded growth of 5.1%.

Increase in rail transport more than compensates for fall in inland waterway handling
2018 was the warmest and one of the driest years in Germany since records began. For months on end, hardly any rain fell … and the waters of the Rhine and Danube dropped to historically low levels. This situation also had an effect on bayernhafen Nürnberg and bayernhafen Roth: In 2018, the volume of goods transported by inland waterway at both bayernhafen locations fell by 28% to 262,010 tonnes. However, this decrease was more than compensated for by significant growth in rail transport, with 4.019 million tonnes of freight moved by rail at bayernhafen Nürnberg, up 9.6% (350,583 tonnes) on 2017. This increase includes both conventional rail traffic, with the commodity classes of mineral oil products, ores and scrap metal, as well as combined transport (CT). The top commodity classes transported by inland waterway were fertilisers followed by minerals and earths.  “Although extreme situations such as low water levels naturally have an impact on our inland waterway handling,” says Alexander Ochs, the Managing Director of the operator of bayernhafen Nürnberg and Roth, “because we provide multimodal links between the transport modes and because our customer and freight structure is highly diversified, we can easily compensate for it. This has proven its worth, particularly in years when conditions are difficult.”

High-value, heavy-lift goods were also transported by inland waterway, taking the pressure off the road networks. For example, in 2018, the heavy-lift specialist, Züst & Bachmeier Project GmbH, loaded four 500-tonne transformers from the Siemens transformer plant in Nuremberg onto barge at bayernhafen Nürnberg for transportation to customers around the world. “The heavy-lift expertise in place at bayernhafen Nürnberg is a decisive factor for securing the commitment of companies from the mechanical and plant engineering sectors to the metropolitan region of Nuremberg and beyond,” says Alexander Ochs.

Intermodal handling up 5.1%
Several times a day, an intermodal train links bayernhafen Nürnberg to the German North Sea ports of Hamburg and Bremerhaven, and scheduled container train services transport goods to Rotterdam and Chengdu in China. In Summer 2018, rail services to the Baltic port of Lübeck also went into operation. The ‘Bavaria Shuttle’ connects the Baltic region, including Scandinavia, Russia and the Baltic states, with the metropolitan region of Nuremberg – and hence to Southern Germany, Austria and Eastern Europe. This is reflected in the continued growth in container throughput in bayernhafen Nürnberg: the 302,326 TEU (*1 TEU corresponds to a twenty-foot equivalent unit) in the 2018 financial year surpassed the volume of TEUs achieved in the previous year by 5.1% (14,768 TEU). “Companies are increasingly choosing combined transport for long-distance transport,” says Alexander Ochs. “That is why we are planning to implement a programme of optimisation to increase the capacity of the container terminal. The application for planning approval has already been submitted.”

Information superhighway at the speed of light

In 2018, bayernhafen also invested € 4.5 million in its Nuremberg location in re-developing sites for commercial use and in its multi-year project to optimise the rail and inland waterway infrastructure. The City of Nuremberg and the Free State of Bavaria invested in the development of the fibre-optic network as part of a funding program to gradually roll out high-performance broadband networks across Bavaria. Data transmission speeds of up to 1 gigabit per second are now available in bayernhafen Nürnberg – a true information superhighway at the speed of light. “Our investments aim to significantly increase the efficiency of our infrastructure,” says Alexander Ochs. “This will enable our customers to benefit in terms of improved planning and greater efficiency in their logistics chains.” For 2019, bayernhafen is planning to initiate an investment programme of € 4 million, which will include developing its quayside facilities.

The quality of the location has attracted more companies to bayernhafen Nürnberg: In the middle of 2018, the real estate developer and high-value industrial and logistics properties investor, greenfield development, initiated the second construction phase of its multi-user industrial and logistics facility. Construction of the third greenfield development facility at the head of the dock has been in progress since October 2018, with the start of operations scheduled for May 2019. The tenant will be MTP Messtechnik Produktions GmbH. And in bayernhafen Roth, the waste disposal specialist, EZF Entsorgungszentrum Franken, further expanded its activities. “Companies choose bayernhafen Nürnberg because it offers space for their commercial activities,” says Alexander Ochs. “As we own the properties, the rental and leasehold contracts we offer provide them with an excellent basis on which to build. Other factors are the trimodal infrastructure, synergy between the companies operating from the port sites and the incentive provided by the improvements we have made to the quality of the location.”

Land recycling instead of land consumption: This is the strategy guiding bayernhafen – the site architect – in bayernhafen Nürnberg. “We continually redevelop our sites for future use,” says Alexander Ochs. “In addition, we work together with experts to develop ideas, for example, for multi-storey logistics properties, concepts for parking facilities and sharing, and we manage vacant warehouses and office space at the location. So far, we have found solutions for almost all commercial site development and expansion requests.”

In June 2018, the job fair ‘Jobport’ premiered at bayernhafen Nürnberg. In an outdoor container setting, high-school students, recent graduates and job seekers came together with exhibitors from 20 logistics companies from bayernhafen Nürnberg and the metropolitan region. A total of over 1,000 visitors discovered the jobs and opportunities on offer in the world of logistics. “Port and logistics – this is a highly exciting international work environment for a wide variety of professions and skills”, says Alexander Ochs. “We are actively joining forces with the companies operating from our locations to take a clear stance against the shortage of skilled workers. In addition, we are closely coordinating with these companies on the development of ideas for new needs-based services at the location. Together we are strong.” The next ‘Jobport’ takes place in bayernhafen Nürnberg on 16 May 2019.