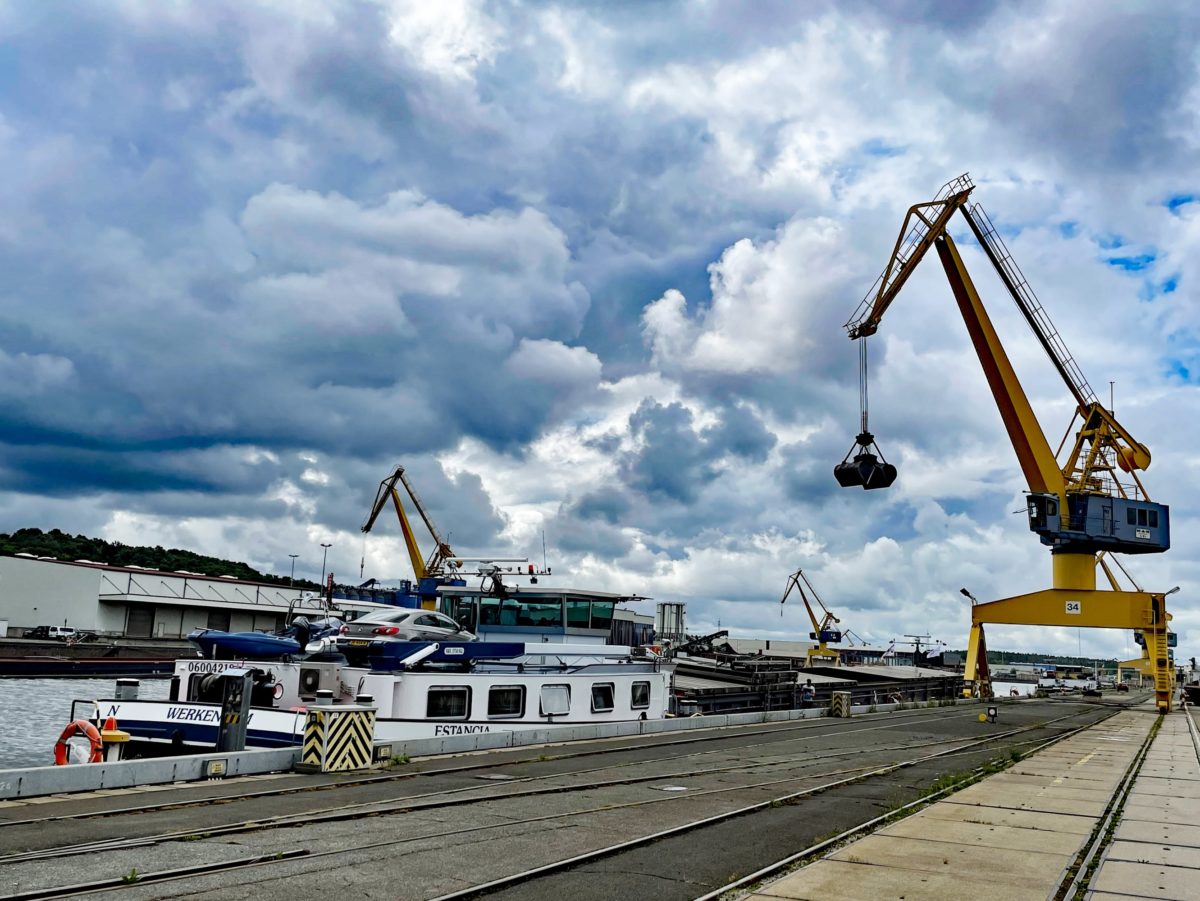 Nuremburg, 16 March 2022 – bayernhafen brings together a diverse range of goods and delivers the right infrastructure to meet the challenge of shifting long-distance traffic from the road networks to the two environmentally friendly transport modes of inland waterway and rail. In 2021, bayernhafen moved a total of 9.15 million tonnes of cargo and freight by inland waterway and rail at its six locations of Aschaffenburg, Bamberg, Nuremberg, Roth, Regensburg and Passau – a 4.6% increase on the previous year. This corresponds to around 535,000 fewer truck journeys. A total of 4.1 million tonnes of goods were moved by inland waterway and rail at the bayernhafen locations of Nuremberg and Roth in 2021, an increase of 11.5% on the volume recorded in the previous year.

At 331,214 TEU (twenty foot equivalent unit), container throughput at bayernhafen Nürnberg recorded significant growth, up 20.6% on the volume of the previous year.

The CT terminal, which went into operation in 2006, has reached the limit of its capacity, which means that the upcoming expansion will be key to future viability. With the aid of funding from the federal government, module 1 will involve converting two sidings into handling tracks and adding three high-performance cranes. A total of around € 20 million is to be invested in the expansion of the CT terminal at bayernhafen Nürnberg.

Since January 2022, a new intermodal service now connects the CT terminal in bayernhafen Nürnberg 5 times a weekto Rotterdam Cobelfret. From Rotterdam, ferries travel on to London, Dublin and Killingholme. In addition to containers, the service also allows the transport of semi-trailers and swap bodies. The new service is making a direct contribution to shifting continental traffic from road networks to the more environmentally friendly transportation modes of rail and inland waterway.

Inland ports and the infrastructure they provide ensure the reliable supply of goods as well as the shift to the more environmentally friendly transport modes of inland waterway and rail.

“At each of the regions in which we operate we act as a hub for the import and export of goods and are a driver of the regional economy. Our inland ports and the infrastructure they provide ensure the reliable supply of goods to the region as well as the shift to the more environmentally friendly transport modes of inland waterway and rail,” says Joachim Zimmermann, the Chief Executive Officer of bayernhafen. “This requires investment in trimodal port infrastructure and the concentration of logistics companies at the ports. That is why we must emphatically reject the idea of restricting functioning port land through changes of use in the surrounding areas, or using port land for other purposes on a larger scale. In the spirit of mutual consideration, any existing restrictions need to be minimized.”

It is currently not possible for bayernhafen to estimate the extent of the impact the war in Ukraine will have on the economy and hence on the logistics sector and international supply chains, whether on container traffic, agricultural produce or the supply of raw material for industry.

In 2021, as part of its multi-year investment programme, bayernhafen invested around € 3.6 million in in the redevelopment of its commercial sites and port infrastructure at its Nuremberg and Roth locations. This includes maintenance work on its rail facilities, the re-development of its quays and planning for the expansion of the CT terminal. Construction started on Quay 1 in December 2021, with contracts for construction and planning work on the CT terminal to be awarded by the end of March 2022. For example, in 2022, bayernhafen is planning to invest in work on its rail infrastructure and the acquisition of a mobile crane.

As bayernhafen currently does not have any more commercial sites available, but demand for logistics sites remains high, it is planned to optimise ship-side infrastructure. Adapted to the changed structure and volumes of goods, three hectares of land are to be reclaimed by partially filling a 300 metre section of the dock.

In its capacity as site architect, bayernhafen creates the conditions for growth in its own real estate. bayernhafen strategically manages its land through consistently focusing on recycling, rather than consuming, land. A perfect example of this strategy at bayernhafen Nürnberg is the new logistics and technology centre developed by the Geis Group, which was created through the conversion of land in direct proximity to their existing properties. The project comprises two facilities; part 1 was completed in April 2021 as the central storage facilities for Beko Grundig Deutschland and the Uvex Group. Part 2 commenced operations in February 2022 and enables Faber-Castell to significantly expand its worldwide customer service within a short distance of the headquarters in Stein – thanks to state-of-the-art, automated processes. Goods can be received or shipped by container via the nearby CT terminal from or to destinations around the world.

2021 also saw the handling of numerous heavy-lift or over-sized cargo and freight via bayernhafen Nürnberg and Roth. One memorable contract involved four mega-transformers (each weighing around 300 tonnes) destined for the TenneT substation in Würgau that were transported by inland waterway to Nuremberg, and then on to Lichtenfels and the last mile by road to Würgau. In addition to boilers, two huge steel box girders were handled at bayernhafen Roth. In total, bayernhafen’s heavy-lift expertise took more than 70 components off the road networks to be transported to their destination via inland waterway and/or rail systems.

Inaugurated in 1972 as part of the trans-European waterway between the North Sea and the Black Sea, bayernhafen Nürnberg is now one of the most important freight villages and logistics centres in Europe. The port is a driver of employment for the region, safeguarding the jobs of around 7,000 people. To celebrate its 50th birthday, bayernhafen plans to invite members of the public to a festival at the port on Sunday 18 September 2022. The aim of ‘The port experience – live’ programme is to open the visitors’ eyes to the diverse world of logistics and to demonstrate the importance of inland ports to the public at large.