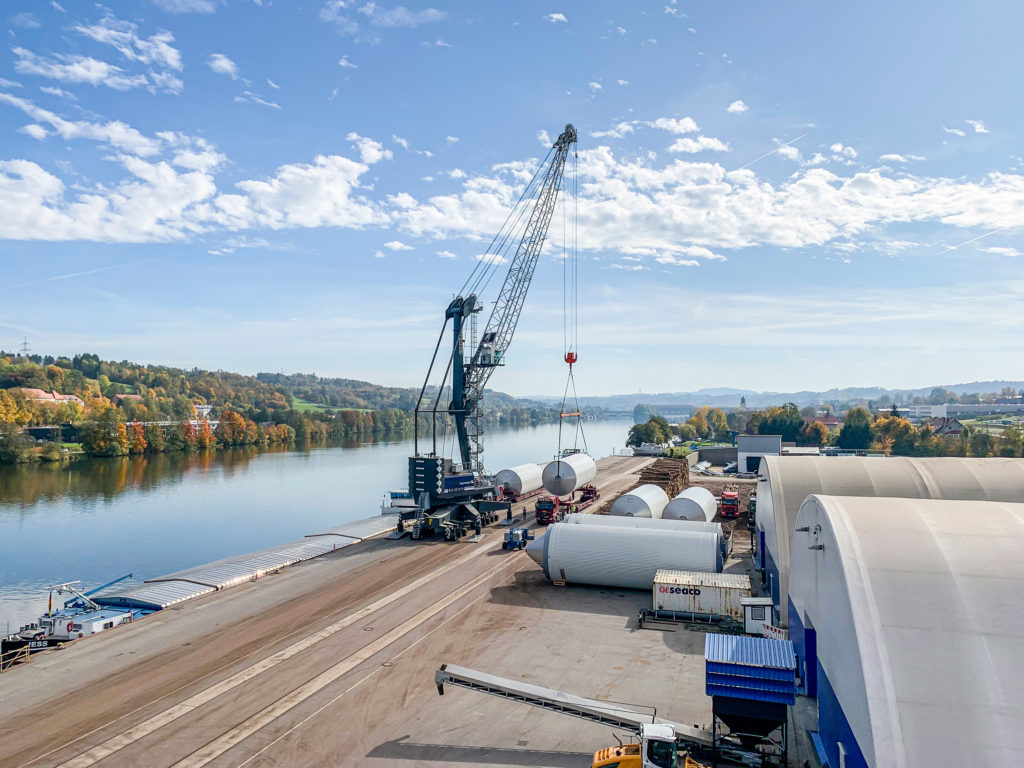 Passau, 18 March 2020  – In 2019, bayernhafen Passau (along with Aschaffenburg, Bamberg, Nuremberg, Roth and Regensburg, one of the six bayernhafen inland port locations) consistently pursued its strategy of developing bespoke infrastructure to shift long-distance traffic from the road networks to the more environmentally friendly transport modes of inland waterway and rail. In the 2019 financial year, a total of 351,665 tonnes of cargo and freight were moved by inland waterway and rail at bayernhafen Passau – a 6% increase on the 331,759 tonnes of the previous year.

Inland waterway handling totalled 299,789 tonnes in 2019, up 1.9% on the record-breaking low-water year of 2018. Rail handling increased significantly by 37.8% to 51,876 tonnes.The main goods handled by rail in 2019 were cement, timber and road vehicles. The lion’s share of the shipping tonnage was made up of agricultural produce. Both ro-ro transport, which links Passau via Enns to Vidin and Ruse in Bulgaria, and heavy-lift/large-volume transport also continued to play a major role: In October, 24 beer storage tanks changed transport mode – from inland waterway to road – at bayernhafen Passau en route from Upper Franconia to the Budweiser Budvar brewery in the Czech Republic The heavy-lift handling operation included the deployment of the port’s dedicated mobile crane, which entered into service at the start of 2019.

Through its skill in developing interfaces bayernhafen Passau is a modal shift guarantor, because its ability to efficiently link the different modes of transport enables businesses to opt for rail and inland waterway for long-distance transport as alternatives to transport by road. Through this strategy, bayernhafen is making a key contribution to tapping the full potential of the different transport modes. This takes pressure off the road networks and reduces CO2 emissions.

In 2019, bayernhafen initiated a € 1.5 million investment programme at the Passau location in the redevelopment of its commercial sites and port infrastructure, including in silo facilities in Passau-Schalding and in the development of berthing infrastructure for river cruise ships at the Passau-Racklau location. In 2020, bayernhafen is planning to launch an investment programme in Passau that will involve allocating around € 3 million over a several-year period.