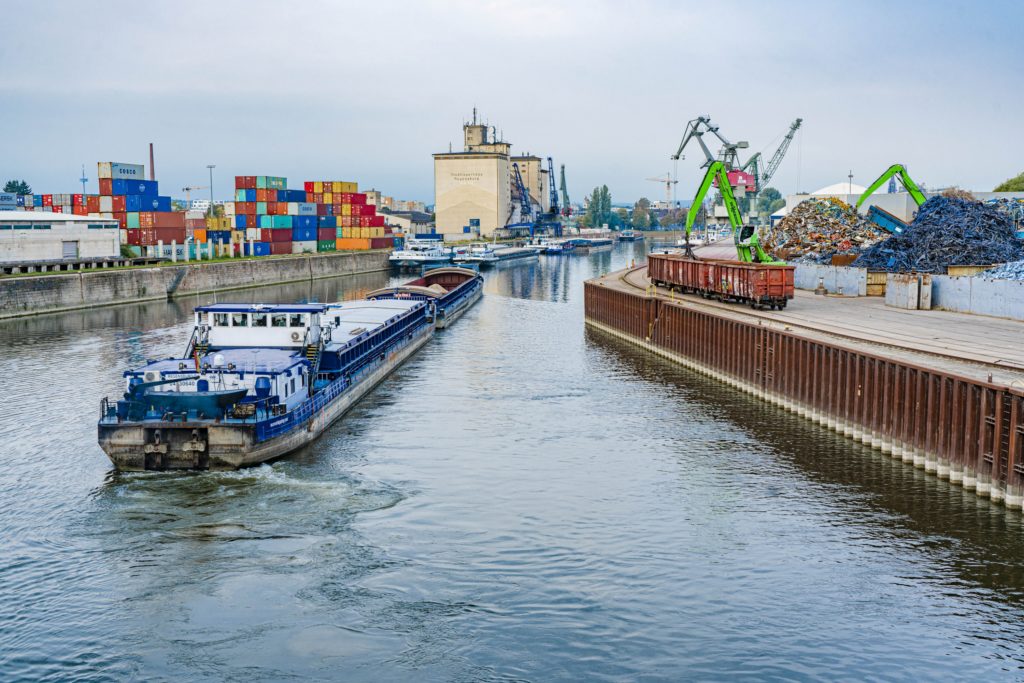 In 2019, the cumulative freight transferred by rail and inland waterway at bayernhafen Regensburg was 2.865 million tonnes. Image source: bayernhafen / Ziegler

Regensburg, 12 March 2020 – In 2019, bayernhafen Regensburg (along with Aschaffenburg, Bamberg, Nuremberg, Roth and Passau, one of the six bayernhafen inland port locations) consistently pursued its strategy of developing bespoke infrastructure to shift long-distance traffic from the road networks to the more environmentally friendly transport modes of inland waterway and rail. In the 2019 financial year, a total of 2.865 million tonnes of cargo and freight were moved by inland waterway and rail at bayernhafen Regensburg – a 3.2% increase on the 2.776 million tonnes of the previous year.

Following the record-breaking low-water levels of 2018, the volume of goods handled by inland waterway recovered in 2019, growing by 18.7% to 1.387 million tonnes. In contrast, rail freight handling fell by 8% to 1.478 million tonnes – this was due to circumstances on the global markets, which also affected the Bavarian industrial sector in 2019. The impact of fewer exports is reflected in the capacity utilisation of the logistics chains. This downturn also impacted on container throughput, which was 19.3% down on 2018 at 100,592 TEU (twenty-foot equivalent unit). As in the previous year, the lion’s share of the shipping tonnage was made up of agricultural products, followed by metal products, ores and construction materials. Additionally, high-value heavy-lift goods were also loaded onto barge to begin their journeys around the world. Rail freight handling primarily involved cement, mineral oil and containers.

In 2019, bayernhafen once again maintained the high level of investment it had made over the previous years, launching a € 13.5 million investment programme in the redevelopment of the commercial sites at its location in Regensburg as well as in its port infrastructure. For example, bayernhafen Regensburg inaugurated the first terminal in Bavaria specialised in handling swap bodies and semi-trailers. The terminal fulfils domestic destination transport needs, such as through optimisation of supply lines for the automotive sector. The Hellmann intermodal train connects Regensburg to Hannover and Osnabrück, achieving a further reduction in road traffic. Furthermore, the new ‘trailer port’ generates additional trans-Alp freight transport capacity, in the process helping, for example, to relieve the pressure on the Brenner motorway over the longer term. In 2020, bayernhafen Regensburg is planning to launch an investment programme that will involve allocating around € 7 million over a several-year period.

In December 2019, another important step was taken towards further boosting bayernhafen Regensburg’s infrastructure for combined transport. The Federal Minister of Transport, Andreas Scheuer, personally presented a grant award to fund the digital transformation of the trailer port in bayernhafen Regensburg, with work due to start in 2020. This will enable bayernhafen Regensburg to further consolidate the key role it plays as an interface between the different modes of transport while making an even greater contribution to protecting the environment. “Infrastructure is the key to bringing about a modal shift,” says Joachim Zimmermann. “That is why we are consistent in our investments and the utilisation of our skill as commercial site developers. There is still room for improvement in the pace of planning permission – for this reason, we welcome any input that speeds up approval processes.”

As a ‘site architect,’ bayernhafen creates the right conditions for attracting manufacturing and logistics companies, who use the port intensively to conduct long-distance transport operations by inland waterway and rail. bayernhafen manages its land strategically, placing a consistent focus on recycling, rather than consuming, land. Through its successful combination of land and infrastructure, bayernhafen provides the companies operating from its ports with the best conditions for doing business. “The key prerequisite for this is the clear demarcation between port and residential areas,” says Joachim Zimmermann. “The port has been in operation for 150 years and, from the very first day, it has symbolised both Regensburg’s role as a powerhouse of trade as well as the interlinkage of the different modes of transport. To enable the port to also exercise its role as a cargo and freight hub in the future, it is necessary to guarantee both the port’s operational viability and provide opportunities for development. The zoning plan procedures for the west port / oil port involve achieving legal certainty and planning reliability out of a historically evolved cluster of conflicting interests – for the benefit of both the customers of the port and for its neighbours. In the spirit of good neighbourliness, we advocate the clear demarcation of port and residential areas at all bayernhafen locations.”

In 2019, the real estate group, Goodman, developed a new logistics centre in bayernhafen Regensburg: at the end of the year, Kühne + Nagel, one of the leading logistics services providers in the world, moved into the approximately 16,000 m2 premises. The real estate project in Bukarester Straße is an excellent example of bayernhafen’s strategy for redeveloping sites for reuse rather than building on greenfield sites. In addition, the logistics company, Horst Pöppel Spedition, expanded its warehousing capacity through the construction of a multi-user warehouse that now enables it to improve daily deliveries to the main logistics centres of the retail food sector in Germany. Horst Pöppel Spedition is an intensive user of bayernhafen Regensburg’s rail infrastructure. Completion of the new warehouse is scheduled for the first quarter of 2020.