“Leveraging the potential of rail and inland waterway” 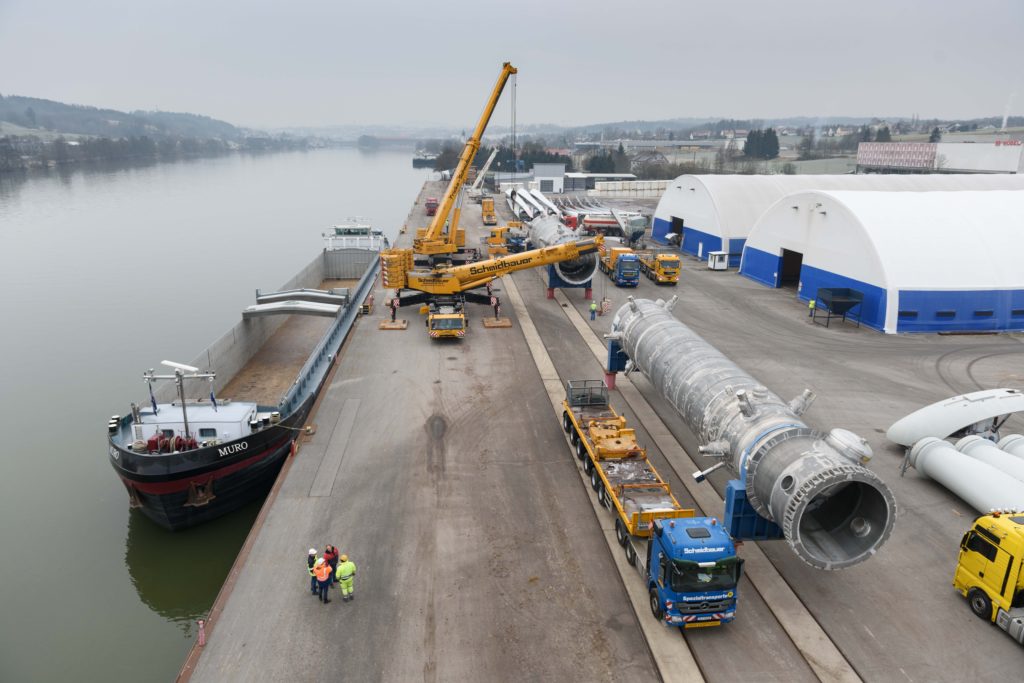 Transporting heavy-lift goods by inland waterway takes pressure off the road network. For example, at the start of 2018, two heat exchangers manufactured by Linde Engineering for a liquefied natural gas (LNG) plant were loaded onto a barge in bayernhafen Passau.

Regensburg, 5 March 2018 – In 2017, bayernhafen Gruppe continued to pursue its strategy of creating the best possible conditions for the transport of freight by inland waterway and rail at its corporate locations in Aschaffenburg, Bamberg, Nuremberg, Roth, Regensburg and Passau. In the past financial year, the corporate group initiated investments of approximately €30 million. A total of 9.1 million tonnes of freight were moved via the environmentally friendly transport modes of inland waterway and rail in 2017, up 0.7% on the previous year.

In January, parts of southern Germany saw the coldest temperatures in over 30 years.  The build-up of ice brought shipping on the Main-Danube canal and the Bavarian Danube to a standstill for three and a half weeks until the middle of February. As a result, the volume of goods transported by inland waterway in the first quarter of 2017 was down by around a third compared with the same period in 2016. However, this shortfall was more than compensated for over the course of 2017, with the volume of goods transported by inland waterway across the entire corporate group reaching 3.195 million tonnes, up 5.9% on 2016. Key to this was the development at bayernhafen Regensburg, the largest port in Bavaria in terms of goods transported by inland waterway. The lion’s share of the shipping tonnage was comprised of agricultural products along with human food and animal feed. Additionally, high-value heavy-lift goods, such as transformers or plant machinery manufactured in Bavaria, were also loaded onto barge, taking the pressure off the road networks.

Rail freight handling fell 1.9% on the previous year to 5.872 million tonnes. One of the reasons for this was the decision of the Italian state railway to suspend the ‘Rolling Road’ (RoLa) between bayernhafen Regensburg and Trento from 30 June 2016 onwards. The Brenner route is currently the subject of intensive discussions, in particular in light of the severe traffic congestion affecting the motorways on the German side caused by the block clearance of heavy goods vehicles in Tyrol. At the international Brenner Summit in early February 2018, the representatives from the world of politics agreed to develop a set of proposals by May on how the ‘Rolling Road’ over the Brenner can be utilised to shift more freight from road to rail. bayernhafen Gruppe will play an active role here. “We welcome the subsidies proposed by the Minister of Transport, Christian Schmidt, at the Brenner Summit as an essential measure for making cross-border ‘rolling roads’ attractive to the market again,” says Joachim Zimmermann, Chief Executive Officer of bayernhafen Gruppe. “We are ready to restart the Rolling Road.”

Container handling at the bayernhafen locations in Aschaffenburg, Bamberg, Nuremberg and Regensburg remained stable, with the 450,944 TEU achieved in the 2017 financial year almost matching the 459,794 TEU of the previous year.

Land recycling instead of land consumption
At its six locations, bayernhafen Gruppe offers its customers temporary land ownership through leasehold and rental agreements. This ensures that land is used sustainably, reduces vacancy rates and enables a change in usage of one and the same site – that is, site recycling instead of greenfield site construction. An example of this is a conversion project in bayernhafen Aschaffenburg: A factory that produces concrete rail-track sleepers is currently being built on the site of a former transformer substation, with the opening date scheduled for April 2018. The port is the ideal link between the three transport modes of rail, inland waterway and road.

“Maintaining and developing infrastructure is a never-ending task,”
says Joachim Zimmermann. “Infrastructure is the backbone of our industry – it must be continually kept up to date. In our capacity as owner-developers, we carry out this work ourselves. Improving the basis for transporting goods by inland waterway and rail requires persistence and perseverance. That’s why we invest continually in rail and water infrastructure and in the services we deliver at our locations.”

For 2018, bayernhafen Gruppe is planning to invest around €32 million in all of its locations – on top of the €30 million investment it instigated in 2017. This includes re-developing sites for commercial use and carrying out optimisation work lasting several years on the rail and inland waterway infrastructure. For example, in 2017, work began on converting a sloped bank into a vertical bank. This measure will optimise the loading and unloading of cargo from and to barge. The plans for 2018 also include modernisation of bayernhafen Gruppe’s fleet of cranes.

Joachim Zimmermann: “The world of politics has the essential task of taking a holistic view of all modes of transport and strengthening multimodal infrastructure. The new federal government has the opportunity to add inland waterway transport to its rail freight master plan. We need an integrated concept that will boost Germany’s position as a business location over the long term and that will enable us to leverage the potential offered by rail and inland waterway.”

We would be more than happy to provide you with the following photos as JPG files. When using the images, please ensure that the sources are attributed correctly.