“The key to modal shift is infrastructure” 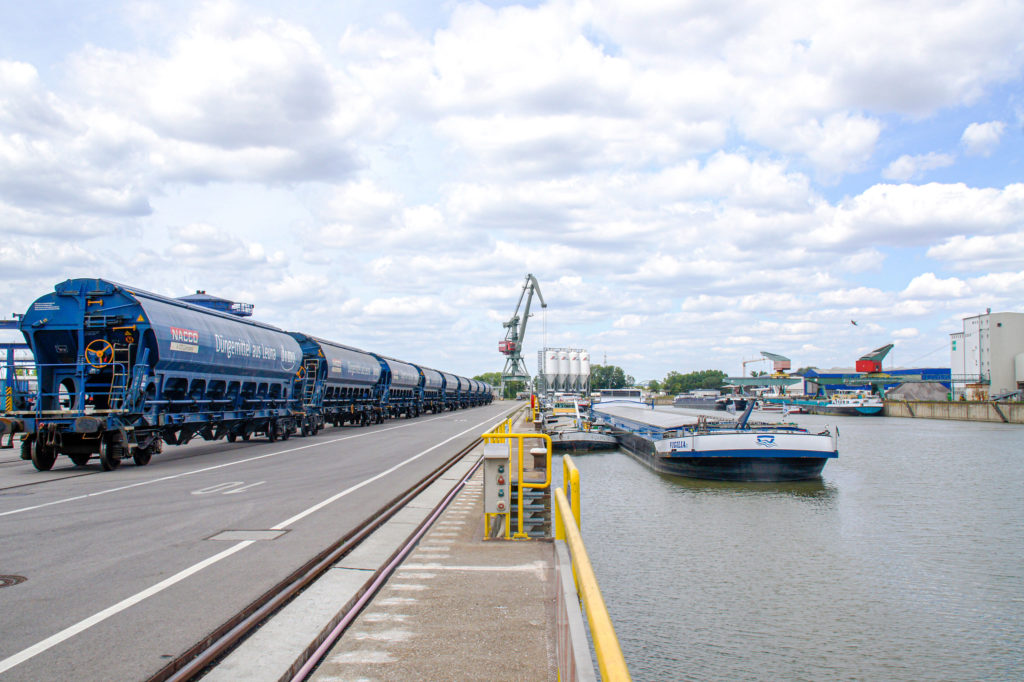 In 2019, the cumulative freight transferred by rail and inland waterway in bayernhafen amounted to 9.3 million tonnes, a 5.3% increase on the previous year. / (image source: bayernhafen / Ziegler)

Regensburg, 5 March 2020 – In 2019, bayernhafen consistently pursued its strategy of developing bespoke infrastructure to shift long-distance traffic from the road networks to the more environmentally friendly transport modes of inland waterway and rail. The figures for the 2019 financial year confirm that bayernhafen is on the right track: in 2019, bayernhafen’s six locations in Aschaffenburg, Bamberg, Nuremberg, Roth, Regensburg and Passau moved a total of 9.3 million tonnes of cargo and freight by inland waterway and rail – a 5.3% increase on 2018.

We pool freight volumes and link the modes of transport. “We are the key to bringing about a modal shift.

Inland waterway benefitted from the lion’s share of the additional 465,833 tonnes. Following the record low water levels of 2018, it regained strength in the 2019 financial year, recording water-borne cargo throughput of 2.95 million tonnes in 2019, a 17.8% increase on the previous year. At 6.328 million tonnes, rail handling maintained the level it reached in the previous year. This clearly shows that bayernhafen’s skill in developing interfaces is a guarantee for bringing about a modal shift, because efficiently interlinking the modes of transport at bayernhafen’s locations enables businesses to opt for rail and inland waterway for long-distance transport as alternatives to transport by road. In the process, bayernhafen is making a key contribution to ensuring that the transport modes are used to their full potential whilst taking pressure off road networks and reducing CO2 emissions.

In 2019, bayernhafen once again maintained the high level of investment it had made over the previous years, continuing with its several years-long investment project by ploughing € 21 million into re-developing its commercial sites and port infrastructure. In Regensburg, for example, bayernhafen invested in the first terminal in Bavaria specialised in handling swap bodies and semi-trailers. Firstly, the terminal fulfils the needs of domestic transport, such as through optimisation of supply lines for the automotive sector. For example, the Hellmann intermodal train connects Regensburg to Hannover and Osnabrück, leading to a further reduction in road traffic. Furthermore, the new ‘trailer port’ generates additional trans-Alp freight transport capacity, in the process helping, for example, to take pressure off the Brenner motorway over the longer term. For 2020, bayernhafen is planning to invest a total of € 22.5 million.

In December 2019, bayernhafen took another important step towards further strengthening its infrastructure for combined transport. In Nuremberg, the Federal Minister of Transport, Andreas Scheuer, personally presented a grant award for funding totalling € 14 million. The funding will be used both for the work started in 2020 on digitally transforming the trailer port in bayernhafen Regensburg as well as for development work on the TriCon Container Terminal in bayernhafen Nürnberg. The Federal Ministry of Transport has also awarded funding to increase the capacity of the container terminal in Regensburg. This will enable bayernhafen to further consolidate the key role its port locations play as interfaces between the different modes of transport while making an even greater contribution to protecting the environment.

“It is essential to secure the long-term viability of the port locations,” says Joachim Zimmermann. “This is the only way they can make the important contribution to freight transport, quality of life and modal shift that society demands. The key to this is infrastructure. That is why we are consistent in our investments and the utilisation of our skill as commercial site developers. There is still room for improvement in the pace of planning permission – for this reason, we welcome any input on how to speed up approval processes.”

In 2019, the four CT terminals at the bayernhafen locations of Aschaffenburg, Bamberg, Nuremberg and Regensburg recorded a total throughput of 453,510 TEU (twenty-foot equivalent unit). The 4.95% fall on the previous year was the result of a downturn in global commerce, which was also reflected in seaport-hinterland traffic.

As a ‘site architect,’ bayernhafen creates the conditions for providing high-intensity logistics companies with commercial sites in close proximity to rail and inland waterway facilities. Through strategic management of its land, bayernhafen’s consistent focus is on recycling, rather than consuming, land. By successfully combining land and infrastructure, bayernhafen provides the companies located at its ports with the best conditions for doing business. The key prerequisite for this is the clear demarcation between port and residential areas at all of the bayernhafen locations.

In May 2019, Teamlog inaugurated a further logistics centre at bayernhafen Aschaffenburg for managing the global spare parts business of axle manufacturer, SAF-Holland. The new warehouse is located on the redeveloped site of the former transformer station. In bayernhafen Regensburg, the logistics company, Horst Pöppel Spedition, expanded its warehousing capacity through the construction of a multi-user, rail-connected warehouse in order to improve its daily supplies to the main warehouse hubs of the food retailers in Germany. In the Autumn of 2019, bayernhafen Nürnberg hosted the ground-breaking ceremony for a new LNG service station for heavy-goods vehicles that will be managed jointly by Rödl energie and BayWa AG. LNG (‘Liquefied Natural Gas’) offers an environmentally friendly, high-performance alternative to diesel for long-distance road freight transport.

… opened its doors at bayernhafen Bamberg on 15 September 2019. For one whole Sunday, the port was transformed into a hotspot of exploration and adventure. “Through our port festivals, but also through guided tours of the ports, we show visitors what ports can do and why ports are so important for us all,” says Joachim Zimmermann. “This also enables us to also build acceptance for the important role played by tailor-made infrastructure.” 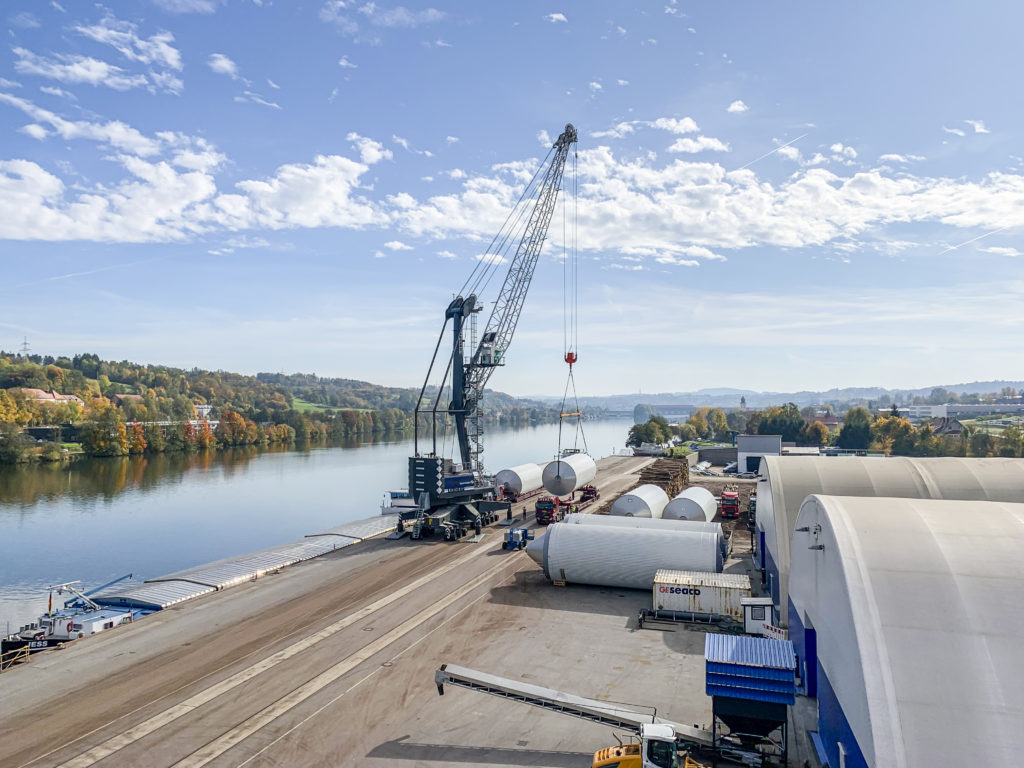 Inland waterway enables heavy-lift freight and bulky cargo to be transported in a safe and environmentally friendly manner. In October 2019, for example, 24 beer storage tanks were transported by inland waterway from Lower Franconia to Passau. The mobile harbour crane, which went into service at the beginning of the year, was used to load the tanks onto specialised vehicles to begin the last stage of the journey to the Budweiser Budvar brewery in the Czech Republic. (image source: bayernhafen / Ziegler)

In 2019, the four CT terminals at the bayernhafen locations of Aschaffenburg, Bamberg, Nuremberg and Regensburg recorded a total throughput of 453,510 TEU. (image source: bayernhafen / Maschauer)