By land, by water and in the air – the multimodal transport network of the metropolitan region of Nuremberg 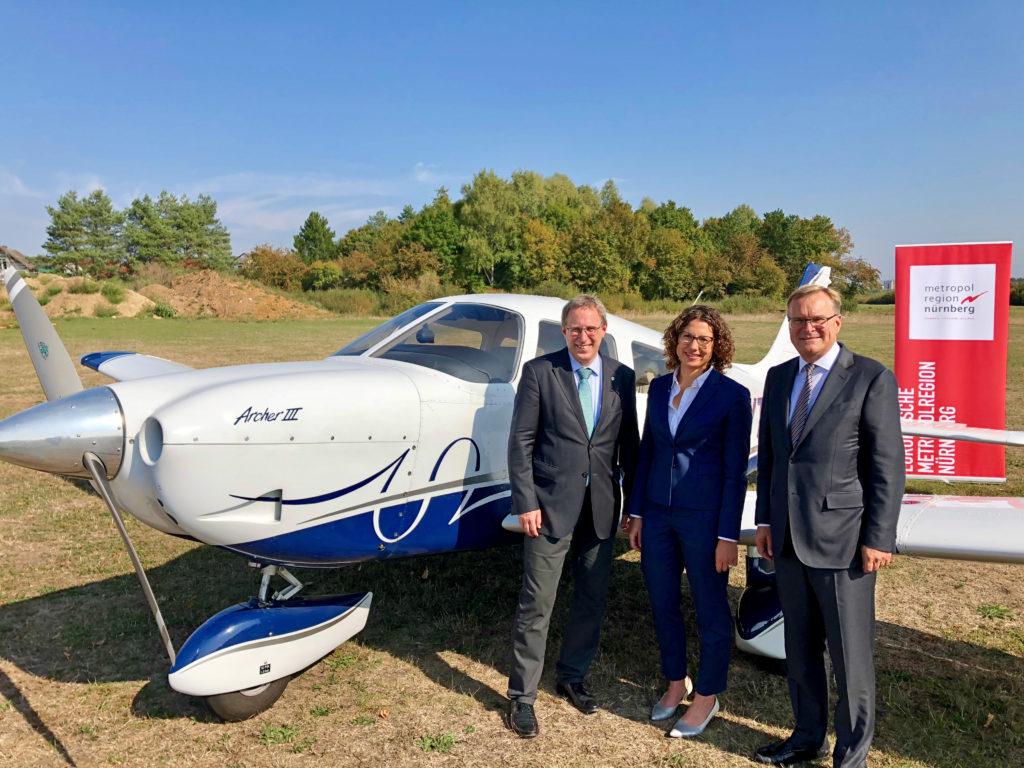 Mobility in the European Metropolitan Region of Nuremberg (EMN) is a vast, excellently positioned playing field involving a broad range of players. This was the conclusion reached by all speakers at the press conference on Friday (28.09.2018) at the control tower of Bamberg Special Airfield. The event was hosted by the Lord Mayor, Andreas Starke, the CEO and Managing Director of Nuremberg Airport, Dr Michael Hupe, and the Branch Manager of bayernhafen Bamberg, Michaela Wöhrl. While Lord Mayor Starke, who is also the Chairman of EMN’s Advisory Council, examined the topic of mobility in the Nuremberg metropolitan region in its overall context, Dr Hupe and Michaela Wöhrl emphasised the special natures of their companies and the important role they play within the EMN.

Around 3.5 million people live in the 23 counties and 11 independent cities of the EMN covering an area of 21,800 km². “For this reason,” says Advisory Council Chairman, Andreas Starke, “it is a key task for the local authorities to ensure mobility for the businesses and inhabitants in our cities and counties. Like the megatrends of globalisation and urbanisation, mobility plays a decisive role in the future of the metropolitan region, since the quality of the transport infrastructure is key to the quality of life and economic strength of the region.”

And, in this regard, the metropolitan region has a lot to offer. All European centres can be reached quickly and conveniently from the metropolitan region of Nuremberg using a wide range of long-distance means of transport. An excellent local transport system ensures the best possible connections within the urban area. The Greater Nuremberg Public Transport Authority (VGN) – the linchpin of the metropolitan region – covers almost the entire area. At around 15, 800 km², it is – after the Berlin-Brandenburg Public Transport Authority – the second largest transport authority in Germany in terms of size and the largest in Bavaria. “I am firmly convinced that, without the metropolitan region, it would not be the second largest public transport authority in Germany. The VGN is a real success story,” emphasises the Lord Mayor. But, of course, one should not rest on one’s laurels. “The Metropolitan Region’s Mobility Congress in April 2018 showed that local authorities must work together with the business and scientific communities on finding practical solutions to shape the mobility of the future. There is no magic formula.” All the more reason for Advisory Council Chairman Starke to be pleased that work is under development with EMN’s Transport and Planning Forum on the experimental space ‘The Future of Mobility’.

Echoing the remarks of Lord Mayor Starke, Dr Michael Hupe, Managing Director of Albrecht Dürer Airport Nuremberg and Technical Spokesman of the Traffic and Planning Forum of the EMN, says: “A well-functioning airport offering connections around the world is an important factor for attracting and retaining internationally operating companies. Likewise, trade fairs and the tourism sector also need an airport in the immediate vicinity, in particular for international guests.”

Not only has the total number of passengers risen in recent years to an anticipated 4.4 million in 2018, but the proportion of passengers heading to the metropolitan region has also risen steadily: up to 21% in 2017 alone. New direct flights from the UK, Italy and Eastern Europe have also made a considerable contribution to this growth, with business passengers accounting for around half of inbound travellers.

More than 1,000 jobs at Flughafen Nürnberg GmbH and its subsidiaries generate an annual turnover of over € 100 million. Approximately 4,000 employees work directly at the airport, creating around € 300 million in added value. When all 12,000 direct and indirect jobs connected with the airport are taken into account, the added value amounts to almost € one billion. This macroeconomic perspective does not even factor in the so-called catalytic effects. The positive impact of the airport on industry and tourism far surpasses the bare figures,” says CEO Dr Hupe.

Michaela Wöhrl, the Branch Manager of bayernhafen Bamberg, pointed out the special nature of bayernhafen Bamberg: “As a trimodal transport hub, we link inland waterway, rail and road. This makes us a major driver of the economy of Upper Franconia. We see ourselves as ‘site architects’ who develop strategies spanning different companies and locations, invest in high-performance infrastructure, and cooperate closely with the companies settled in the ports to tap new potential for value creation. We develop sustainable logistics solutions for the benefit of the regional economy.”

bayernhafen Bamberg, which together with the inland ports of Aschaffenburg, Nuremberg, Roth, Regensburg and Passau is part of the bayernhafen corporate group, is a major hub for freight traffic in the Upper Franconia region. bayernhafen Bamberg is home to 70 companies providing around 1,800 jobs – however, the regional impact of the port on employment is considerably higher and amounts to a total of over 5,000 jobs region-wide.

bayernhafen Bamberg also uses its infrastructure for its ‘bayernhafen cruise services’ business segment: In total, up to nine river cruise ships can dock simultaneously at the three piers in bayernhafen Bamberg. In 2017, 804 cruise ships carrying almost 130,000 passengers docked at bayernhafen Bamberg. Studies have shown that each cruise ship passenger spends on average € 29 per day in Bamberg on souvenirs, snacks, taxis, and so on, along with further indirect spending on services such as bus trips and bus transfers. Additionally, the cruise ship passengers, who mostly come from America and Australia, act as ‘influencers’ by spreading the word back in their home countries about the cities they visited. At the end of 2016, in cooperation with the City of Bamberg and the management of the ‘white fleet’, bayernhafen organised the Cruise Ship Open Days in bayernhafen Bamberg. This event generated ideas on how to better reconcile the interests of river cruise tourists with those of the citizens of Bamberg, such as through smaller groups, different routes, and the use of local products on the ships. They will also explore new ideas for transporting passengers from the port to the city centre. “We attach great importance to balancing the interests of tourist groups and the citizens of Bamberg,” emphasises Michaela Wöhrl. “We have been engaged in constructive dialogue with the City of Bamberg for years.”