The winners of the 2019/20 ‘bayernhafen Tailwind’ competition

Ten projects from the bayernhafen locations receive grants of € 1,500 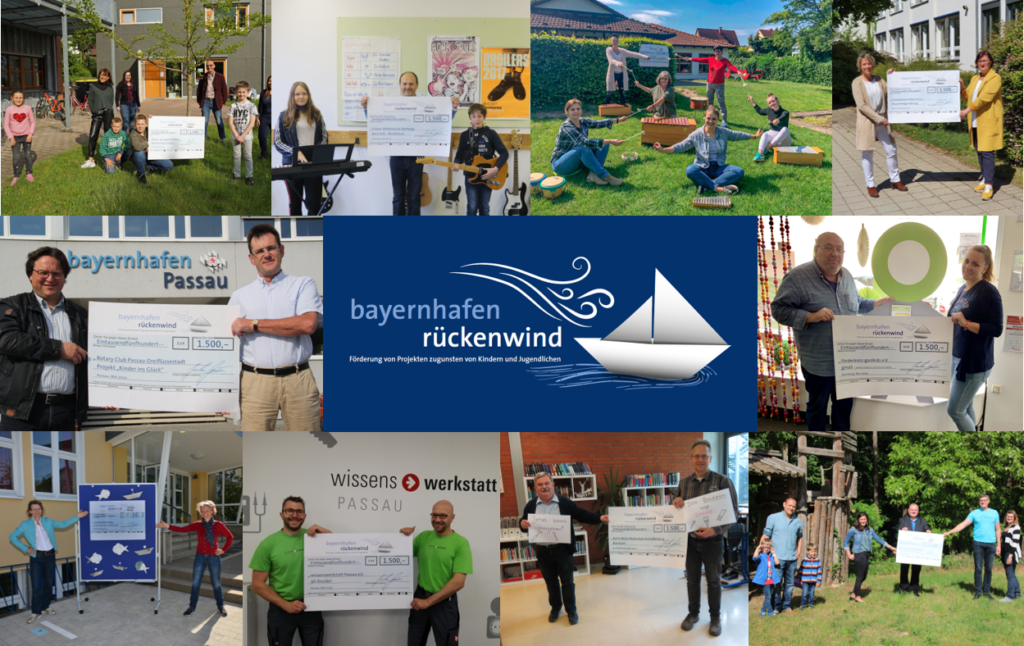 New instruments for a school rock band in Bamberg, a container turned into a replica of Castle Kammerstein for a children’s playground or new reading material for a school library in Regensburg – just three of the ten winning projects of bayernhafen’s ‘Tailwind’ competition. bayernhafen, which comprises the inland port locations of Aschaffenburg, Bamberg, Nuremberg, Roth, Regensburg and Passau, awards grants totalling € 15,000 to support social projects that help children and young people.

In their role as cargo and freight hubs, the bayernhafen locations connect regional economies to the rest of the world. Through this role, they work actively towards shifting long-distance traffic from the road networks to the environmentally friendly transport modes of inland waterway and rail. “The bayernhafen locations make a major contribution to the long-term economic development of the region. This competition underscores our responsibility towards society,” says the Chief Executive Officer of bayernhafen, Joachim Zimmermann. “We are really pleased to be able to support these fantastic projects and programmes for children and young people and wish all involved every success in turning their ideas into reality.”

bayernhafen launched the competition at the end of 2019. Clubs, associations, organisations, institutions and initiatives in Bavaria were given the opportunity to submit their projects directly for consideration. The Tailwind jury deliberated over more than 50 projects and ideas and selected ten projects that would each receive a ‘financial tailwind’ of € 1,500:

The winners of the 2019/20 ‘bayernhafen tailwind’ competition

Haus für Kinder St. Laurentius in Aschaffenburg-Leider – Music transcends borders
The “multicoloured musical house” offers daycare facilities to children ranging in ages from one to the end of primary school. The funding is to be used to purchase musical instruments for the crèche, kindergarten and childcare centre in order to find even more creative and imaginative ways for the children to develop their musical abilities.

Ruth-Weiss-Realschule Aschaffenburg building team
The pupils of the school building team will carry out a range of construction and repair projects in the school building. The grant will be used for the purchase of materials and tools. As soon as school operations permit, they plan to extend and repaint the bicycle storage room, build a sunshade for the beehives on the roof and renovate the school library.

Grundschule Hohes Kreuz – re-design of the school yard
Following the introduction of all-day schooling, a new building wing was added to the Hohes Kreuz Primary School in the east of Regensburg. However, the building work resulted in the loss of a part of the outdoor playing facilities that was previously available to the pupils for breaks and play. It is now planned to make a child-friendly modification to the existing facilities: a climbing wall will be installed and timber pillars mounted to act as privacy screens that will be decorated with figures designed by the children.

Grundschule Keilberg – Schulförderverein Keilberg e.V. – “tailwind” for the school library
As the district of Keilberg did not have a library, the School Support Association opened one in Keilberg Primary School in 2019. The school’s pupils use the school library extensively and the plan is now to develop the facilities further. While the school was closed, a “contactless library lending program” was organised for the children in order to support the development of their reading skills. As soon as school operations permit, among a raft of ideas, it is planned to construct a ‘captain’s cabin’ with books on the subject of water and shipping.

Erlöser-Mittelschule Bamberg – the Rock Kids school band
The ‘Rock Kids’ school band gives children the opportunity to learn an instrument irrespective of their parents’ financial circumstances. The aim of the initiative is also to help young people develop their self-confidence and personal resilience through playing music and performing in public. The grant will be used to keep the successful project going as well as to fund musical instrument lessons and the purchase of new musical instruments.

Förderkreis goolkids e.V. – ginaS – natural integration of all sports people
Förderkreis goolkids e.V. is a charitable association dedicated to helping socially disadvantaged children and young people. The ginaS Project aims to find new, long-term ways for disabled advocacy groups and sports clubs to actively bring children, young people and above all disabled people together in regional sports clubs and associations, such as through inclusive running groups, cooperation with a fitness studio and an inclusive football team.

Parent’s Advisory Committee of the Kita Kammerstein – container castle as children’s playground
The municipality of Kammerstein is the operator of the children’s daycare centre in Kammerstein, which looks after children ranging in ages from 11 months to the end of primary school. Together with the voluntary support of the parents, a 20-foot sea container is to be turned into a new play zone for the children consisting of a replica of Castle Kammerstein, along with battlements and a castle tower. The grant is to be used to purchase the shipping container and other construction materials.

Kinder- und Jugendtreff WH13 – renovation grant for youth club
The Kinder- und Jugendtreff WH13 is a centre operated by the Protestant and Lutheran parish of Katzwang that offers recreational, cultural and educational opportunities, counselling and information to young people between the ages of 6 and 15. The grant is to be used to renovate the youth club’s premises. This will include re-designing the walls and possibly upgrading its outdated technical equipment.

wissenswerkstatt Passau e.V. – financing of 3D printer
The aim of the non-profit organisation ‘wiwe’ is to instil enthusiasm for technology and the natural sciences in children and young people. The grant will be used to purchase a 3D printer that will enable the children to discover this pioneering technology.

Rotary Club Passau-Dreiflüssestadt – The “Making Children Happy” Project – PASSgenAU
Initiated by the Business Forum of Passau and the school authorities in 2012, the aim of the “PASSgenAU” Project is to provide completely new educational opportunities to children and young people who are disadvantaged or struggle with learning difficulties. From the very beginning, the Rotary Club Passau-Dreiflüssestadt has exclusively supported this campaign in several schools and kindergartens. The ‘tailwind’ will be used to fund 120 additional hours of support for primary schools in Passau.
For more information on the project, visit https://www.passgenau-passau.de/ueber-passgenau/